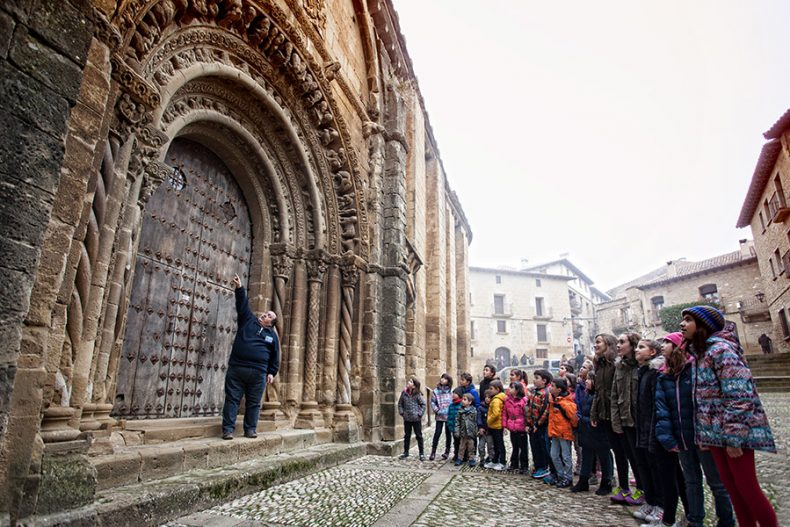 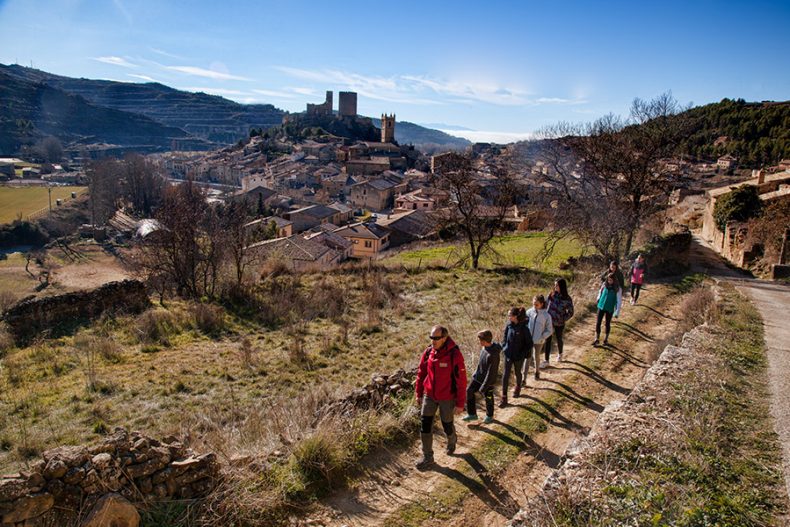 Its name is a result of its location as a border town during the Middle Ages, since it was located between the Christian kingdoms of the north and the Muslim territory. Uncastillo can’t just be described in a few words, for its overwhelming number of sights: seven temples, a castle, a modern interpretation museum housed in historical buildings and palaces … For all of this it is probably the most prestigious and noble town of the Cinco Villas.

Located 115 kilometres away from Zaragoza, Uncastillo surprises the visitor by its physiognomy, crowned by its castle and palace of Pedro IV, at the top of the Peña de Ayllón, on which the village is built by the means of terraces.

Amongst the streets and squares, the remains of its old Jewish quarter are breath taking with a splendid synagogue which may be visited along with the charming narrow Jewish streets, with this special dark light, especially remarkable in the area of Barrionuevo.

It is said that on one of the walls of that area, was engraved a singular Jewish inscription relative to the grave “of the old man, the just and wise Rabbi Meir, son of the “honourable Rabbi Ya’agob”, although this inscription is not preserved, it remains part of the history of the Jews of Uncastillo, who, in the fifteenth century, represented a community of about 130 people, many of them dedicated to shoemaking and tailoring.
The other curious thing about Uncastillo was its Local Ordinations system which was set through an agreement between the local council and the noble man who bore the highest title in the Villa, given that in those times the legal owner of the villa was the King.

First they prepared a list for the city council which was finally selected by a draw celebrated every August 14th, the eve of the feast of the Virgin, while the positions of judges of common law – which exercised in the courts of Uncastillo, Layana and Malpica de Arba- were named on the day of San Blas (early February).

The same system was used to appoint the city finance officer, the almutafaz, – the person who controlled the weights and measures used by the traders-, the prosecutor of the judicial processes, also called “for the poor and widows”, whose work was similar to a public solicitor. This election system began to be applied in Uncastillo in the year 1445.

But Uncastillo’s local history goes back to romans as evidenced by the site of Los Bañales, a 20 hectares archaeological site in which an intact thermal baths (1st century AD), an aqueduct and other singular spaces, such as a domus and the forum have been recovered.

The successive excavating archaeological works promoted by the Government of Aragon, the Uncastillo Foundation and the Comarca of the Cinco Villa are reviving a city which, due to its size and importance, was probably one of the most representative roman places of the Cinco Villas. Today it is one of the most singular Roman site in Aragon.
According to historical documents, the Baths belonged to the Vascones, a people that occupied a territory that would now cover Navarre and the Cinco Villas up the Gállego river, which have been under the jurisdiction of Caesaraugusta (Zaragoza), well connected to it through the road to Pompaelo, the current Pamplona.

Nowadays, Los Bañales can be discovered through the numerous campaigns of restorations and guided tours that take place in the site, especially in summer.

Finally, it is worth mentioning that at this time, and also in autumn, there is a specially recommended hiking trail to the tower of Sibirana, an ancient castle from the 12th century, which stands out for its location, erected on top of a rock, challenging the mountain and the walker.